The cryptocurrency market has been moving from one consolidation phase to another, with major price devaluations seen on the charts from time to time. Over the weekend, the Bitcoin market noted yet another devaluation, one that pulled its price from $9.17k to $8.82k in a matter of just 6 hours. It should be noted, however, that at the time of writing, Bitcoin had recovered to hold steady above $9000.

In fact, the tremors of the falling Bitcoin market were also felt by the industry’s altcoins, with Ethereum [ETH], the world’s second-largest cryptocurrency, noting a 6.44% fall of its own at the same time.

The aforementioned fall could have been associated with the Options expiry of a huge number Bitcoin contracts expiry on 26 June.

According to data provider Skew Markets, approximately 114K BTC Options with a notional value of over $1 billion expired on 26 June. This accounted for nearly 60% of the total Open Interest in the BTC Options market. The expiries in question contributed to a dip in Bitcoin’s price, with its Implied Volatility falling on the charts as well.

Correspondingly, owing to the strong correlation indices between two of the world’s biggest digital assets, Ethereum’s market followed the lead of Bitcoin as well.

In fact, as per Skew markets, the ETH-BTC 3 month ATM Implied Volatility had plunged into the negative zone, at the time of reporting. 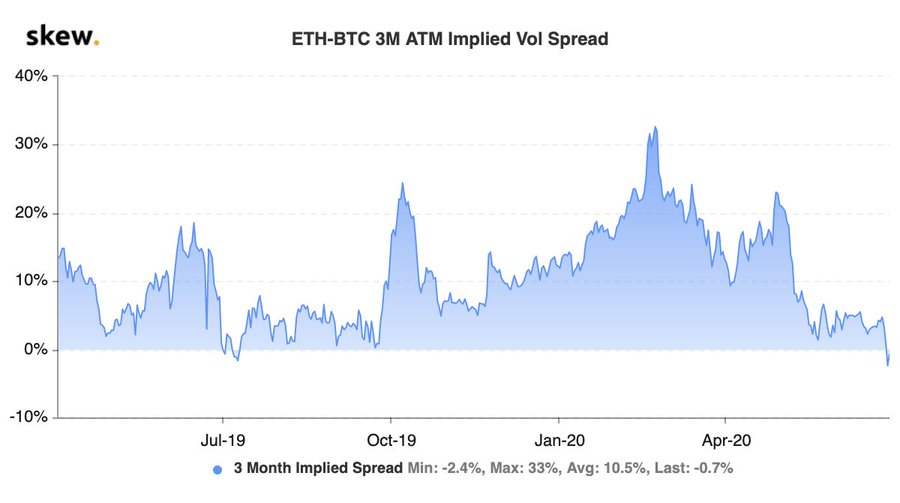 While the IV bottomed at -2.2% on 28 June, it was soon noting an upwards spike the following day. The last time the 3-month IV dipped under the negative zone was in July 2019, a time when the bullish movement in the market reached its conclusion. However, this time around, with the IV dipping so low, any strong price swings might be difficult to see and anticipate.

The implication of this fall could translate into a stronger correlation between BTC and ETH, stronger than ever before. According to Cryptowatch, the ETH-BTC 30-day correlation stood at 0.88, stronger than any other asset. As the Implied volatility dipped, the Realized Volatility was moving upwards, underlining a minimal rise in the value of the crypto-assets. 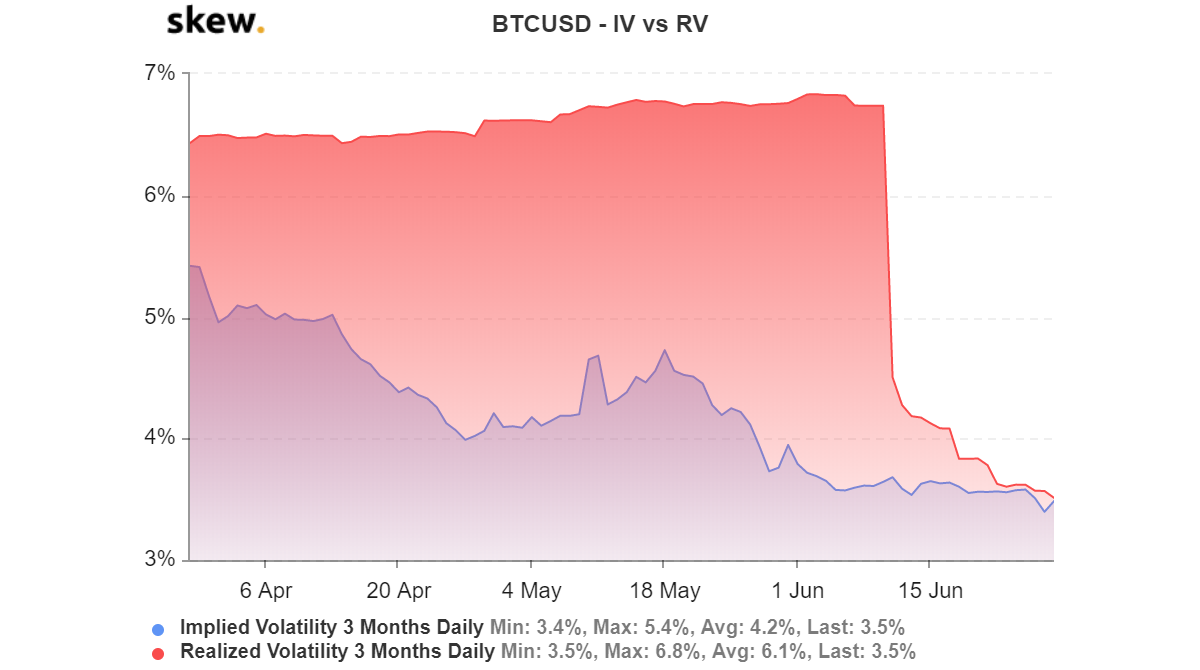 As Ethereum’s IV slipped even lower and highlighted falling volatility in the future, the RV plateaued on the charts. This, as the BTC IV-RV stood at a point of intersection at 3.5%.

Your feedback is important to us!

Ethereum broke above a crucial short-term resistance area this Wednesday. The second-largest cryptocurrency is now eyeing a “significant breakout” towards 0.032 sats, according to analyst Peter Brandt. The veteran financial…

Australian comedian Jim Jefferies has amassed a larger stack of Bitcoin than billionaire Elon Musk. In a June 30 episode of Jefferies’ podcast I Don’t Know About That, the comedian…

Paul Grewal, a former US magistrate judge in California and Deputy General Counsel for Facebook, is joining crypto exchange Coinbase’s legal team. In a July 8 announcement on the Coinbase…

Sergey Nazarov: Smart Contract Adoption by Enterprises About to Take Off

Enterprise adoption of smart contracts and blockchain technology is coming to a head soon, according to Chainlink CEO Sergey Nazarov and Interwork Alliance President Ron Resnick. The pair were members…

Bitcoin is rising steadily and it recently broke the $9,400 resistance against the US Dollar. BTC’s daily chart suggests that the bulls are likely aiming a larger rally towards $10,000.…

The World Economic Forum’s head of blockchain and data policy, Sheila Warren, says that people who have turned away, or been excluded, from traditional financial systems are the ones most…

Following Bitcoin’s Hash Rate, Network Difficulty Is About to Set a New High

Just months ago, in March, many thought Bitcoin was on its way out. The cryptocurrency registered a 50% drop in a single 24-hour period in March, falling as global markets…