Bitcoin investors have been on an accumulation spree for quite some time now. Leading up to the halving, investors, both retail and institutional, were HODling the world’s largest cryptocurrency. While the third supply cut event did not contribute to any wild swings in the price market, the following month also saw flat movement. Interestingly, during this time, the accumulation trend appeared to be strong, despite the lack of momentum in Bitcoin’s price action.

Bitcoin reserves on cryptocurrency exchanges have been sinking to new lows for the last few weeks now. To top that, there have also been reports of mass outflows of Bitcoin from the cryptocurrency exchange, Coinbase. However, it is not just retail investors who are Hodling. Even the number of addresses with 1,000 to 10,000 BTC has shot up over the past couple of days, contributing to a rise in the number of whales due to this trend.

In a recent development, crypto-analytics firm Glassnode revealed that Bitcoin balances on exchanges had just reached a 13-month low of 2,629,751.011 BTC. The development is a culmination of the trend that initially started taking shape in the month of March 2020. 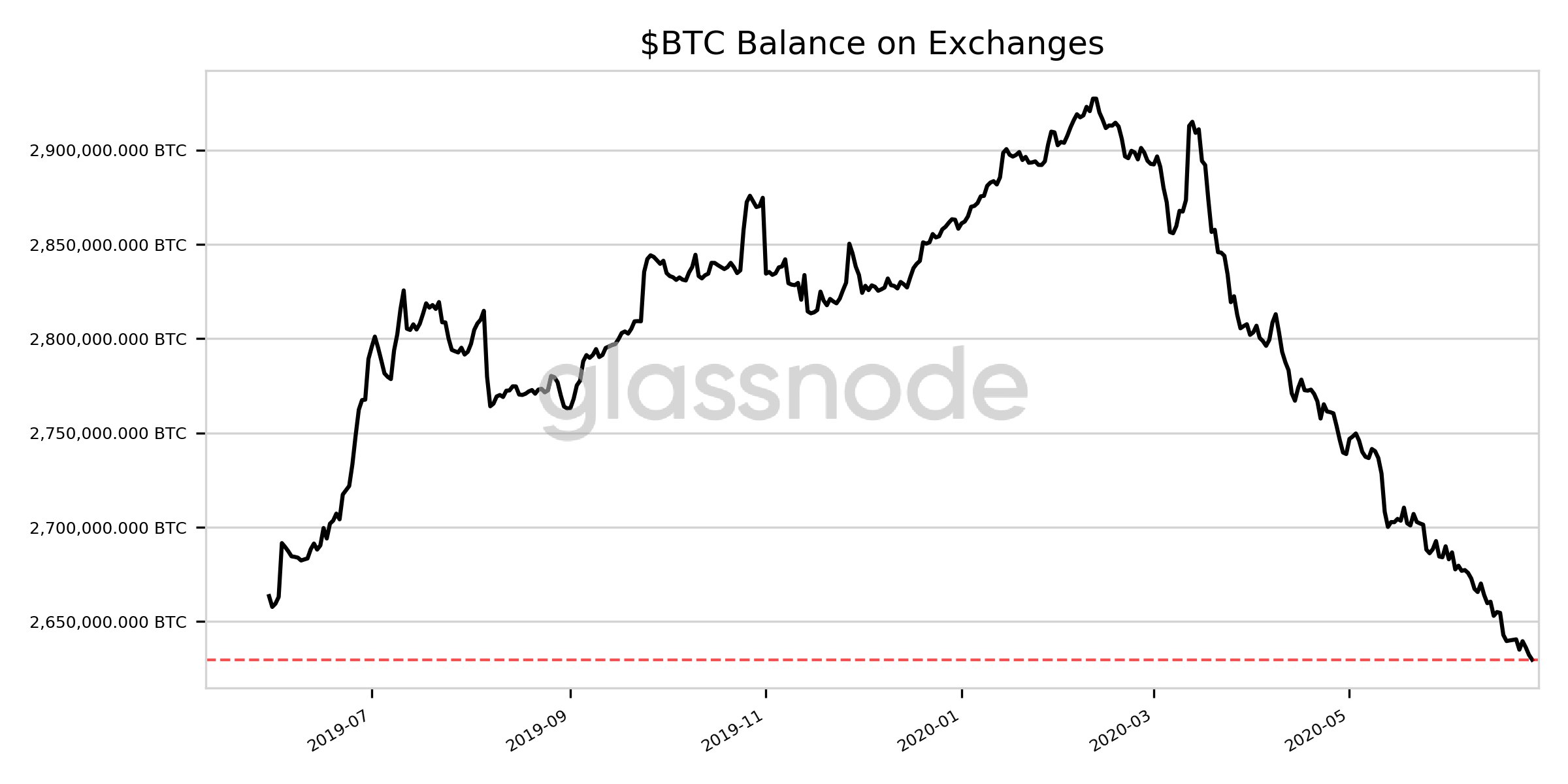 However, the fact that this trend has continued, despite Bitcoin’s recovery since March, is interesting. The latest fall on the charts coincided with Bitcoin almost falling close to $9,000. Despite numerous pullbacks, the coin was still trading close to its immediate support levels on the charts. At the time of writing, BTC was valued at $9,089. Could this mean that Bitcoin has bottomed out? In this case, investors could be anticipating a potential upswing from this level.

This was the expectation shared by many of the market’s analysts as well. In fact, well-known analyst Willy Woo had recently revealed that he is working on a price model that picks the start of exponential bull runs. What really caught the eye of many in the community, however, was the fact that he claimed that this could begin in 30 days. He said,

“Bitcoin was setting up for a bullish run until the COVID white swan killed the party. This model suggests we are close to another bullish run. Maybe another month to go.”

The price model developed by Woo would mean that Bitcoin might be just a few weeks away from an official bull market. As predicted by the model, investors could potentially be waiting for the same at this very moment, which is why holding behavior has gained so much steam over the past few weeks and months.

Your feedback is important to us!

The Taproot upgrade represents one of the most significant developments for Bitcoin’s mainchain in recent months. Despite seeing very little controversy, the community is still debating on the proper procedure…

How a Digital Dollar Can Make the Financial System More Equitable

Patrick Murck is chief legal officer at Transparent Systems, developers of distributed settlement solutions, and an affiliate at Harvard’s Berkman Klein Center. Linda Jeng is global head of policy and…

The Stellar Development Foundation, or SDF, announced the official integration of its blockchain ecosystem into Samsung’s Blockchain Keystore on July 15. This integration aims to provide a solution for Stellar…

700,000 Expedia Hotels Can Now Be Paid With Cryptocurrencies via Travala More than 700,000 Expedia Group hotels and accommodations are now available via crypto-friendly travel booking platform Travala. Bookings can…

Ziglu Insures Cryptocurrency Holdings up to £50,000 Against Cybercrime

United Kingdom cryptocurrency banking platform Ziglu launched an insurance program on July 15 for digital assets held with the service. Under the new program, each customer’s cryptocurrency holdings are insured…

Disclaimer: The following price prediction should materialize over the next two weeks.  When XRP registered a recovery of 103 percent after its price drop on March 13th, many were expecting…