Bitcoin and the aggregated crypto market have flashed some signs of weakness as Bitcoin hovers above its key support level at $9,000.

Its recent decline from highs of $9,800 has come about as the result of multiple strong rejections within the upper-$9,000 region, with the latest decline being triggered by news of a 2009-era wallet transferring 50 BTC.

It doesn’t appear that the technical damage done by this latest decline has been enough to invalidate all of its strength, as analysts are now noting that it could be positioned to push higher in the near-term.

At the time of writing, Bitcoin is trading down just over 1% at its current price of $9,140.

This marks a notable upswing from daily lows of $8,800 that were set during a decline seen overnight.

It does appear that Bitcoin’s reaction to this level indicates that it has some underlying strength in spite of its overt weakness seen throughout the past several days and weeks.

One analyst recently pointed to an ascending trendline that the crypto has defended as a reason why its uptrend still remains strong in the near-term.

The analyst offered a chart showing this trendline, explaining that the cryptocurrency’s bull case remains valid. 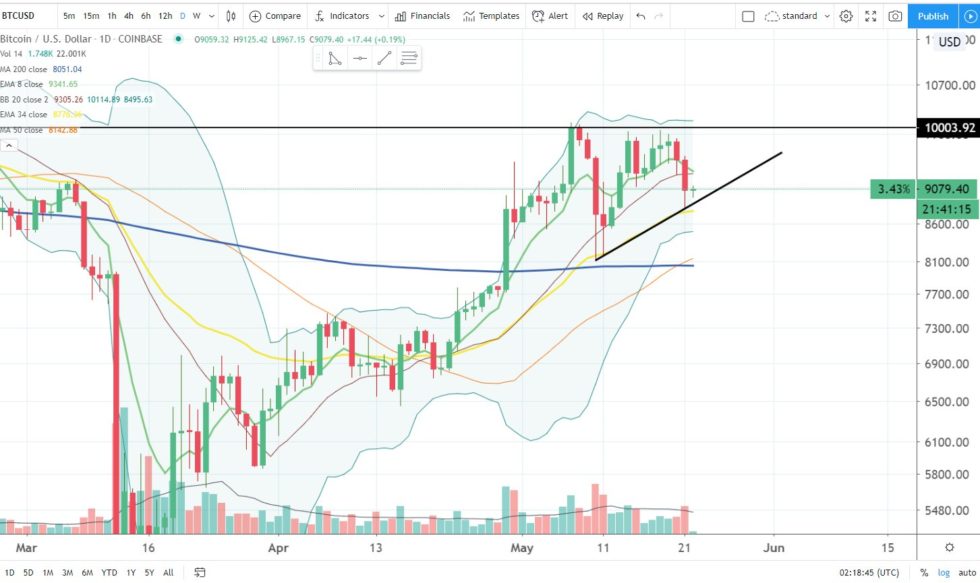 BTC Could Rally into Mid-$9,000 Region Due to Cloud Pattern

The aforementioned trendline isn’t the only thing that could boost Bitcoin in the days and weeks ahead.

Analysts are also noting that the cryptocurrency’s cloud resistance is currently being pierced, with a daily close above the cloud’s lower boundary potentially being enough to spark an uptrend.

This uptrend could lead the cryptocurrency up to the mid-$9,000 region, one analyst noted.

“Success in closing above the cloud, expecting mid 9s~”

How the crypto trades heading into its daily close should offer significant insights into where it trends in the weeks ahead.

South Korea’s Suseong University reached a deal on May 22 with the Korea Artificial Intelligence Association, or KORAIA, to create a blockchain and AI campus in Daegu. According to the…

Where Are the Bitcoin Pizza Coins Now?

On May 21, 2020, the infamous Craig Wright, the man who claims to be Satoshi Nakamoto, submitted a list of blocks and bitcoin addresses to the court that stem from…

China Strikes Down 10% of Global BTC Hashrate, Who Will Pick Up The Slack?

The government of China’s Sichuan province moves to stamp out Bitcoin (BTC) mining activity, citing that growing cryptocurrency prices have led to the escalation of illegal activity under the guise…

Bitcoin’s NVT Indicator Shows that the Network is Incredibly Healthy

One key on-chain indicator is now signaling that Bitcoin is seeing intense underlying strength despite its recent turbulent price action.BTC’s NVT is a widely respected indicator that weighs the number…