Bitcoin faces the prospects of undergoing broader downside corrections as hedge funds rush to short stocks that surged impressively during the coronavirus pandemic.

According to the Financial Times, some fund managers have increased their bets against the shares linked to technology, home gym equipment, grocery retail, and healthcare. Tim Campbell of Singapore-based hedge fund Longlead Capital Partners, for instance, called these stocks “the COVID over-earners.”

The co-founder/chief investment officer noted that the current earnings trajectory of some pandemic winners appears unsustainable in the long-run. He predicted that they would return to the pre-coronavirus growth rate at some point. 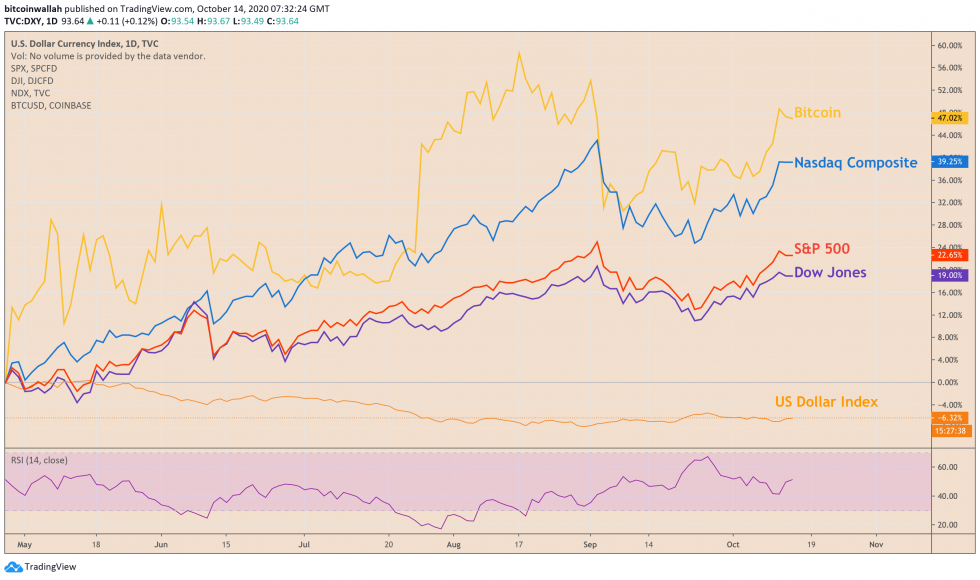 Bitcoin and its positive correlation with the S&P 500, the Dow Jones, and the Nasdaq Composite during the pandemic. Source: DXY on TradingView.com

Analysts have already argued that estimating the actual value of stock market gainers seems complicated, especially amid an environment of ultra-low interest rates and massive central bank and government stimulus that have supported even the worst-looking stocks during the pandemic.

Andrew Sheets, the chief cross-asset strategist at Morgan Stanley, noted that technology – the year’s best performing sector – is at the forefront of facing the most significant declines. He told FT:

“If we’re successful in getting a vaccine and the market thinks 2021 looks more normal, investors may think ‘let me sell companies where it’s as good as it gets now and buy companies with more cyclical earnings’.”

Bitcoin and the US stock market surged and corrected hand-in-hand amid the coronavirus pandemic.

Analysts noted that the Federal Reserve’s near-zero interest rates, coupled with its infinite bond-buying program, trimmed yields of the US government bonds. As a result, investors’ appetite for riskier assets increased, which led them to cryptocurrencies and equities.

Moreover, the US Congress’s decision to pass a $2 trillion stimulus aid stressed the US dollar. That further prompted investors to seek havens elsewhere, primarily benefiting Bitcoin. It rose by more than 200 percent during the greenback’s decline.

Great @FT artice, not #Bitcoin related in the first place, but there are 2nd wave effects! https://t.co/NEV41anHMD

When the stock market showed signs of plunging harder than usual, investors de-risked their portfolios by shorting the most profitable assets for cash. As a result, gold and Bitcoin – two of the best-performing assets before the crash – plunged alongside the S&P 500, the Dow Jones, and the Nasdaq Composite.

Fund managers holding serious bets against the booming stock market also face the risk of losing their capital. It is because of the hopes that Congress would pass the second coronavirus relief bill by the November 3 US presidential election.

The package, which may fare between $1.6 trillion to $2.3 trillion, would reduce the appeal of holding cash further. As a result, investors would inject more money into the stock and commodity markets based on the so-called “There-Is-No-Alternative” factor.

Bitcoin could benefit from the sentiment, as well.

In an ongoing effort to battle escalating transaction fees while creating a unified ecosystem, Ethereum co-founder Vitalik Buterin has proposed a solution for a particular type of cross-rollup scaling. The…

Bitfarms set to acquire 48,000 new miners in 2022 despite chip shortage

One of the largest publicly traded Bitcoin mining operations in the world, Bitfarms, has undertaken to purchase 48,000 new miners over the next two years. The Canadian mining company has…

A think tank affiliated with the Iranian Presidency has unveiled a study report that encourages the use of cryptocurrencies in circumventing sanctions against the country. In addition, the report also…

The rarest Pepe of them all, “Homer Pepe”, has sold for 205 ETH ($320,000) according to owner Peter Kell. The one-of-a-kind card displays a morph between Simpsons character Homer and…

TA: Bitcoin Holding Gains, Why BTC Could Surge Above $50K

NFTs had their best month ever in February, according to a report by DApp statistics trackers at DappRadar. Sales volume from the top three platforms grew to $342 million in…