This week, as a $2 trillion economic stimulus package was put forth by U.S. lawmakers, the performance of major market indexes improved and the Dow registered its best day since 1933, gaining 11% after the major pullback of the last few weeks.

In the meantime, gold increased slightly over 5%. The recent market fall-out gave rise to Bitcoin (BTC) critics such as Peter Schiff claiming that “only fools are choosing Bitcoin” over gold as a safe-haven alternative in the market.

Bitcoin, the best asset of the week

Even though Bitcoin’s year-to-date return is inferior to gold, it is still performing better than the S&P 500 and WTI oil. 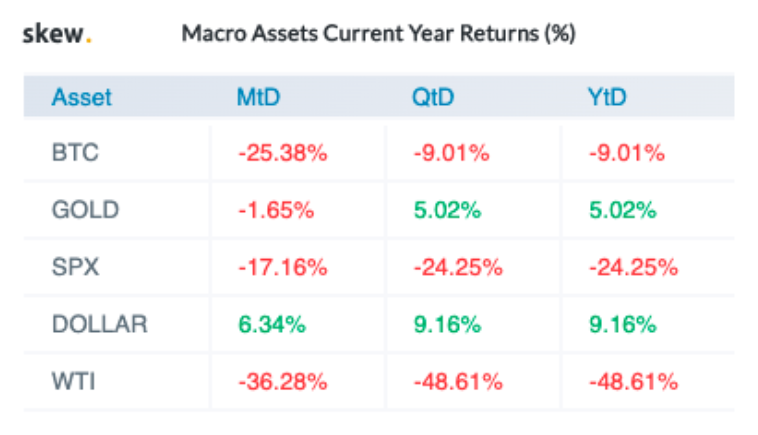 In the aftermath of last week’s global market bloodbath, Bitcoin showed the best return from all these assets, gaining more than 10%

At the same time, an investment in gold came with a negative return, retracing around 4.4% for investors who opted for the precious metal instead of other safe-haven alternatives such as Bitcoin. Indexes like the S&P 500 and Nasdaq kept declining, leading investors to lose 16.2% and 13.5%, respectively. 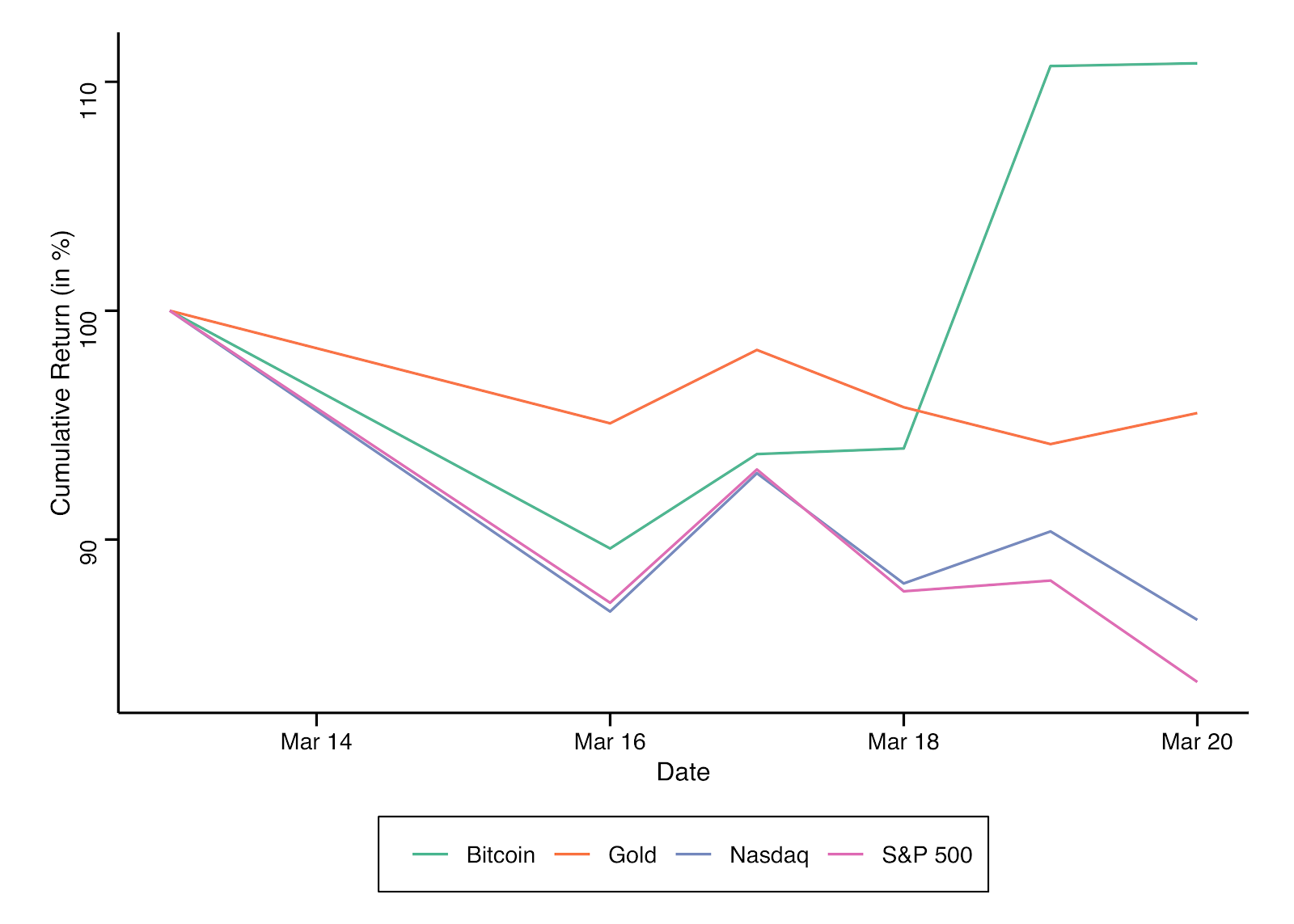 The bullish scenario ahead for both Bitcoin and gold was hinted by well-known analyst, Willy Woo, based on the “decoupling of safe havens assets from equities after “peak fear” as seen since last week.

In our analysis, from March 16 to March 20, gold and the S&P 500 returns correlated at 82.6% and 79.6% with the Nasdaq. This does not suggest that a decoupling effect occurred last week.

However, in the same period, gold and Bitcoin returns correlated at only 37.2%. In a contrasting scenario, it seems that the correlation between Bitcoin and market indexes is much stronger – at 73% with the S&P 500 and 79% with the Nasdaq.

As a benchmark, the week from March 9 to March 13, presented an even stronger correlation between Bitcoin and market indexes (around 79%) and a much stronger relationship with gold (91.6%).

Since Bitcoin’s correction happened (Feb. 19 to March 13), the relationship with gold is still slightly stronger than its relationship to major market indexes.

Nevertheless, as seen from sentiment correlations provided by analytics firm The Tie, Bitcoin and gold sentiment seem to go hand in hand during the month of March and this relationship has been increasing significantly since April 2019.

This shows investors feel that both Bitcoin and gold could be the strongest options to recover their investments amid the current global economic tsunami. 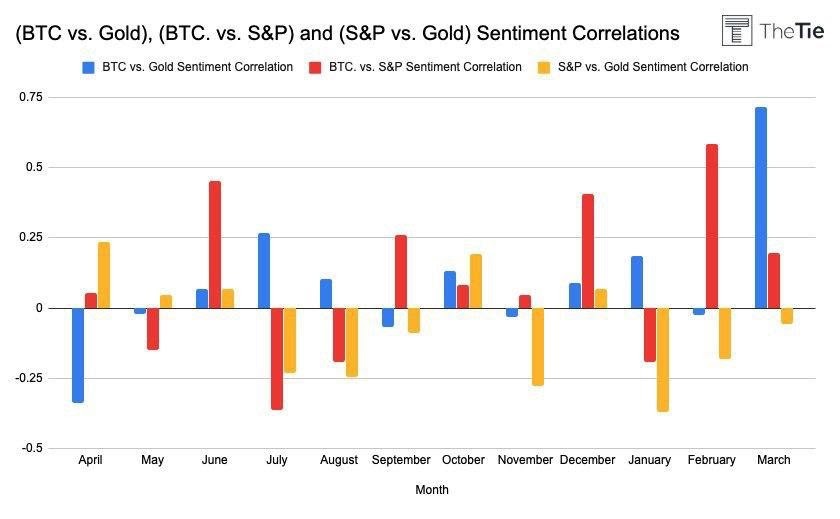 Sentiment correlations between BTC, Gold and the S&P 500. Source: The Tie

Looking at the future outlook between Bitcoin and gold futures general sentiment, it seems that investors believe these are moving together in recent days. As sentiment correlation increased to a positive relationship, this highlights a change from the previous 2 weeks when the community believed this relationship was inverted. 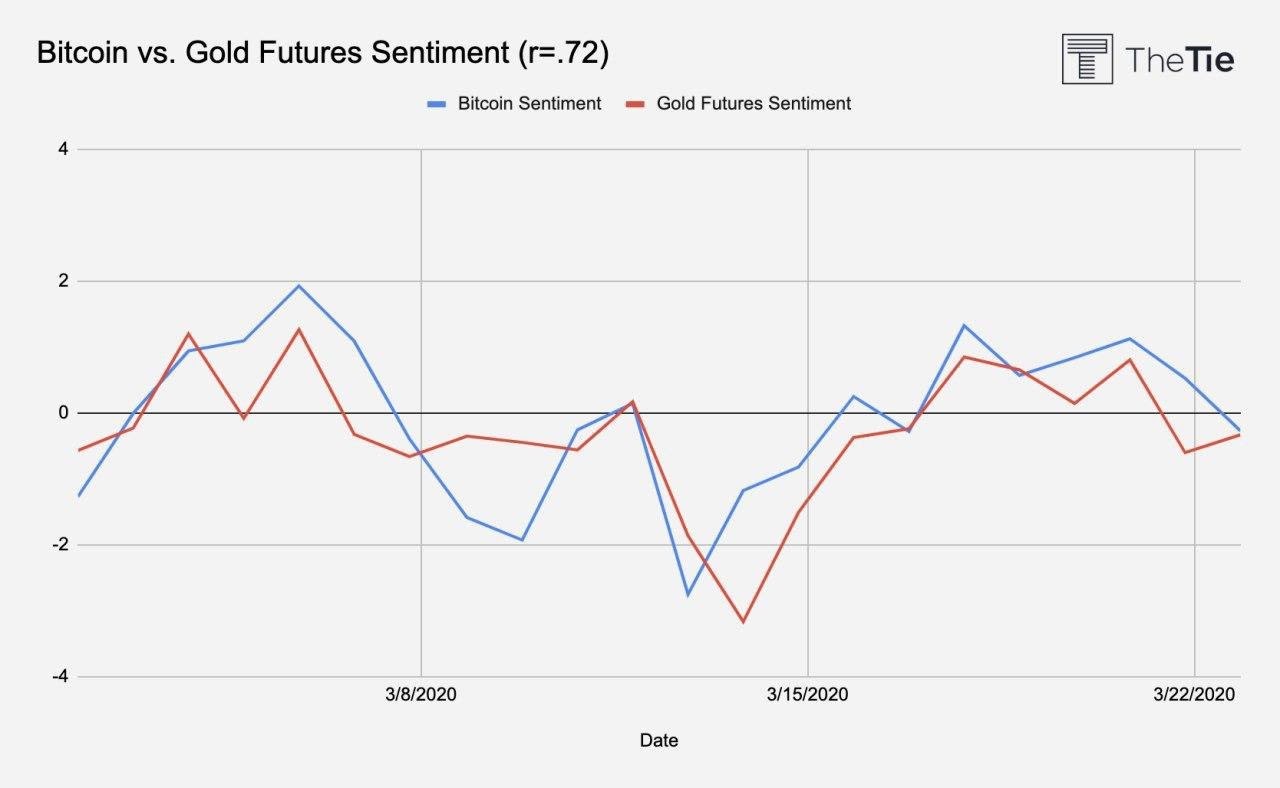 Amid last week’s Bitcoin recovery, there was also a surge in the number of times gold was mentioned in Bitcoin-related headlines. This shows that the media and analysts’ perceptions of both assets’ similarities continue to encourage Bitcoin’s safe haven narrative for investors. 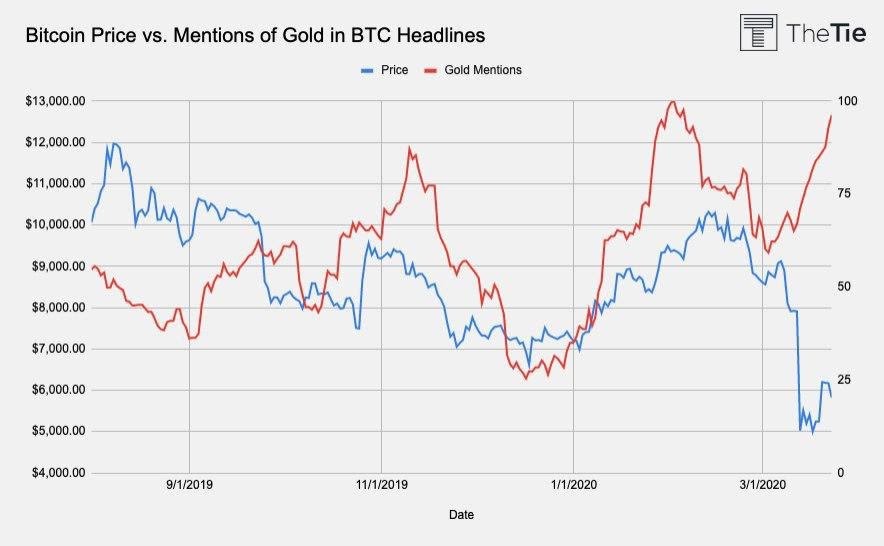 Bitcoin Price vs. Mentions of Gold in BTC Headlines. Source: The TIE

Will gold repeat its 2008 performance?

The unstable correlation between Bitcoin and gold showed week by week highlights the uncertainty of both assets in an unprecedented crisis.

However, in 2008 gold retraced between March and November, surging into new record-highs less than a year later. Currently, it is difficult to determine whether gold and Bitcoin will behave in the same fashion that gold behaved in the aftermath of the financial crisis. Perhaps it will be easier to discern a trend when the coronavirus infection rates begin to mellow.

As analyst Willy Woo proposed, this week’s Bitcoin and gold returns, along with the consolidation of correlations between each asset will determine whether Bitcoin can be included in the safe-haven category.

What could be on display here is simply the public’s positive perception of the relationship between gold and Bitcoin supporting the encouraging returns from last week and also suggesting future joint-positive behavior.

Data for the market indexes and crude oil drawn from Yahoo Finance, LBMA gold prices from gold.org, and Bitcoin prices from coinmarketcap.com. The views and opinions expressed here are solely those of the author and do not necessarily reflect the views of Cointelegraph. Every investment and trading move involves risk. You should conduct your own research when making a decision.

Bitcoin Price Suddenly Drops Below $7K, Crypto Market Under $200B

Bitcoin (BTC) price dropped nearly $200 in minutes on April 10 to slide below $7,000 for the first time in four days. Data from Coin360 and Cointelegraph Markets showed BTC/USD…

Ripple is showing a few bearish signs below the $0.1980 resistance against the US Dollar. XRP price could start a strong decline if it breaks the $0.1900 support area.Ripple price…

Here’s Why Ethereum Could Dive Significantly Below 100 SMA

Ethereum is trading in a contracting range below the $175 resistance against the US Dollar. ETH price seems to be setting up for the next move either above $200 or…

After days of consolidation after rallying 100% from the March bottom, Bitcoin tanked under $7,000 just minutes ago, reaching a local low of $6,920 as of the time of this…

Lawyers for Satoshi claimant Craig Wright have strongly criticised a magistrate’s order as wrong in law and “based in significant part on personal attacks” against Wright and his Kenyan attorney.…

The Bitcoin Fund, managed by 3iq, has completed an initial public offering and has begun trading on the Toronto Stock Exchange (TSX). It has been a long road for 3iq…